Sailing into History: the Romance of the Poster and the Transatlantic Voyage 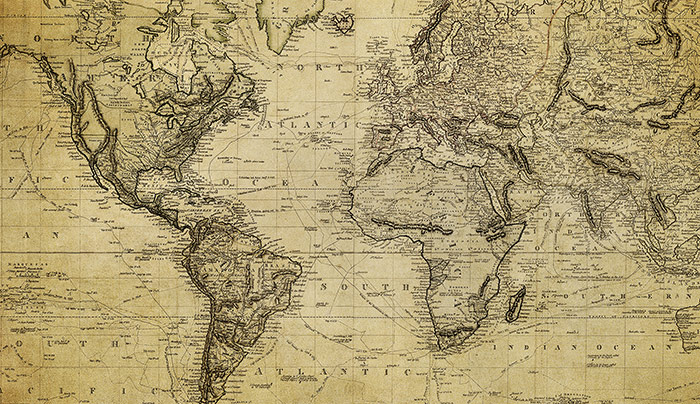 The famous art deco style poster emerged from Europe in the early twentieth century, and in so doing it placed the concept of the poster as a modern art form firmly on the map. The great ocean liners, the ancestors of today’s cruise ships, became iconic images within poster advertising. In the days prior to television, posters had the important role of conveying to people the exoticisms of the distant corners of the world. In one simple image the poster had to bring the golden shores of Australia, the rolling countryside of England, or the towering skyscrapers of New York to audiences who had never seen such things before. Modernist design managed to encapsulate the exotic and the modern, whilst its use of plain shapes and bold lines made for eye-catching posters. With the advent of travel advertising gone were the days of overcrowded images filled with the unnecessary frills of cursive text. In selling transatlantic voyages, the art of simplicity was born.

Without travel the world of the poster would be unimaginably different. For much of the eighteenth and nineteenth centuries, travel was something reserved for the upper classes. In England, the aristocracy would typically have a town house and a country pile, and would make the lengthy and uncomfortable journey between the two a few times a year. Aside from pilgrimages for the devout and journeys to health spas for the middle class tuberculosis sufferers, the form of travel that was most similar to today’s vacation was the Grand Tour. This was undertaken by upper-class European men between 1660 and the early 1930s, although the nature of it changed quite considerably following the advent of rail transit in the 1840s. The Grand Tour was essentially a gap year that was taken after young men had completed their Oxford or Cambridge degree. Its purpose was to travel through France and Italy searching for culture, art, and the roots of Western civilization. This is something that remains incredibly popular to this day, and there are numerous cruises available designed to recreate parts of the grand tour in order to open Europe’s considerable cultural ancestry to modern explorers.

The Grand Tour and its Modernist Legacy

Oddly enough, in terms of the poster the legacy of the Grand Tour has been profound. Across Europe it helped to cement the idea of classical antiquity and the Renaissance as being the most important elements in the European cultural legacy. As the nineteenth century progressed this ideal was increasingly lost by the mainstream who pursued the industrial revolution as an ideal. Nationalism began to swell in Europe, and by the early twentieth century this was already leading towards war. However, it was the European modernists who kept pushing for the importance of art and culture within Europe as a whole, and who refused to let the spirit of cultural importance fade. To be a modernist artist was not to be English or French, but to be European. This vibrant multicultural scene would lead to the development of cubism, futurism, vorticism, and other forms of the avant garde that left such a powerful imprint on the design of posters during the early part of the twentieth century.

Off into the Blue

With the industrial revolution came the birth of travel. Railways and ocean liners were the two major industrial outcomes that opened the doors to the world for the everyday traveler. Although still expensive, cruise liners meant that the middle classes were able to take to the seas en masse for the first time. One only has to look through the passenger records of that most famous ocean liner, the Titanic, in order to see that the majority of passengers were either the middle or lower classes. Whilst the lower classes were typically traveling west to start a new life, by 1912 it was not at all uncommon for families to make the journey across the Atlantic to visit friends and enjoy a cultural experience. This is something that would continue throughout the early twentieth century, as has been well preserved in the tales of hapless Bertie Wooster and his faithful butler Jeeves by P.G.Wodehouse and the many crime novels of Agatha Christie. As travel companies grew and vied for trade, advertising was needed. For this, the poster was ideal.

Modernist art seemed to work particularly well for the ocean liner and Mediterranean cruise. Perhaps the most famous poster designer for cruises was the Ukrainian-French painter A. M. Cassandre. It was Cassandre who created the iconic images of the great ocean liners viewed from just below the bow, so that they seem to tower over the viewer like a great monolith of modernity. His pupil Fix-Masseu tended to show cruise ships in the background of his modernist screen prints, focusing on exotic palm trees and dramatic oriental vistas with the boat an unfailing presence in the background. Tom Purvis was one of the first to explore the use of the attractive female to sell the cruise. Leaning back against the guard rail, sipping a cocktail against the sunset, clothes being whisked by the wind, the cruise ships in these pictures are the stage for the glamour of international travel. In the posters of each of these artists, the cruise ship seems to work particularly well because it is an instantly recognizable image. In the work of Purvis, for example, a guard rail and the curve of a safety buoy are all that is needed to convey the presence of the ship. The focus is on the female, but the liner a conveyed through simple modernist shapes is a powerful presence.

A Match Made in Heaven

Without the need for the travel poster, today’s advertising would undoubtedly be a different world. The necessity for conveying the modernity of travel was a powerful driving force behind stripping the images on a poster down to the bare minimum, and in so doing creating the daring modernist look that still remains as a core principle of poster advertising. The great ocean liners of A. M. Cassandre remain some of the most iconic and highly sought after examples of the genre, and still retain the power to invoke the glamour and pure power of the modern world. A celebration to the ingeniousness of industrial design and carefully balanced beauty, the poster and the ocean voyage have long remained a testament to the power of the poster.

Article brought to you by Claire Platt, Posterini blogger contributor.